In underground mining, it is necessary to support the roof to prevent areas that have already been mined from collapsing. Since the 1950s, the primary method for supporting the roof has been the installation of roof bolts. Roof bolting is one of the most basic and necessary functions in underground mining operation, and over time has become more highly specialised. Today, many operations are requiring equipment predominantly dictated by mine conditions and individual customer desires. 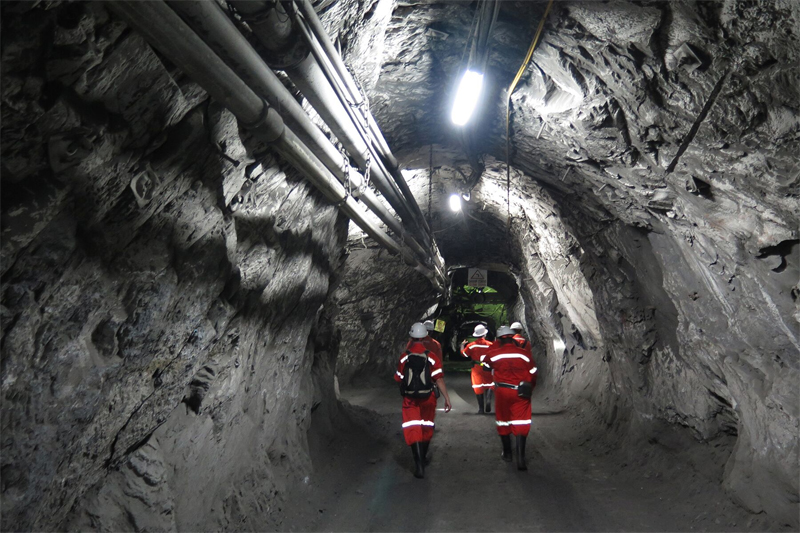 Underground mines are the alternative to surface mines.

Surface mines excavate from the top down, a method that can become inefficient at depths greater than about 200 feet (60 meters).  Undergrounds coal mines can drive 2,500 feet (750 meters) into the Earth and other types even deeper -- uranium mines can reach 6,500 feet, or 2 kilometers. But those depths are extreme; most top (or bottom) out at about 1,000 feet (300 meters).

Mining has changed a lot from the images we have of the 19th century when men with shovels toted canaries to make sure the air underground was not toxic. Modern mines feature extensive ventilation and water-drainage systems, high-tech communication networks and increasingly computerized machines that reduce the number of humans required underground.

All underground mines have some crucial components in common: ventilation shafts to clear toxic fumes from drilling and blasting; escape routes; access shafts to lower workers and equipment; ore-transport tunnels; recovery shafts to carry excavated ore to the surface; and communication systems to send information back and forth between the surface and the depths.

No two mines are alike, though. Technology applications and basic decisions about design and mining method rest on considerations like the type of ore being mined, composition of surrounding rock, shape and orientation of the ore deposit, geologic features underground, and simple economics.

And, very early in the process, the determination of hard or soft.

Even within the hard-rock category, design and extraction methods vary, but almost all revolve around a few basic techniques:

For relatively flat ore deposits, with little change in elevation throughout, miners drill an access ramp to the deposit and remove ore in a pattern of holes (rooms) and roof supports (pillars). The rooms can be mined out using conventional charge-and-blast techniques or, more commonly now, with a machine called a continuous miner. The continuous miner drills into the rock until it forms an excavated room, perhaps 20 to 30 feet (6 to 9 meters), leaving in place a rock pillar to support the "roof". The machine moves through the ore, creating rooms and pillars, until the full deposit is covered. A final pass drills through the pillars to recover the ore there, allowing the roofs to collapse behind the machine as it leaves each room.

For relatively narrow ore deposits, miners drill an access ramp adjacent to the ore deposit, from the surface down to the lowest point of the deposit. An operator then drives a drill through the ore, creating a drift, or a horizontal cut, from one side of the deposit to the other. In the hardest rock, no roof-support is needed; in softer rock, bolts may be placed in the roof as the drill progresses. Once the drift is complete, backfill, or waste material, is spread into the open drift, creating a platform for the next pass. The drill drives on top of this backfill to cut another drift through the ore. This continues until the drill cuts a drift across the top of the ore deposit.

Cut and fill is for hard rock, as it doesn't feature the support mechanisms inherent in and central to a method like room and pillar. The room-and-pillar approach, on the other hand, crosses easily into the softer stuff – and most coal mines.

Coal, salt, uranium, phosphate and oil shale live in soft rock and there are two primary methods in soft-rock mining: longwall and room and pillar. Most coal is extracted using the room-and-pillar approach described previously. However, longwall mining is exploding in popularity.

Rather than drilling through the ore deposit, a longwall machine cuts across it, shaving off slices up to 600 feet (182 meters) long. Those slices drop directly onto a continuously moving conveyor, which carries it to a haulage shaft that lifts it out of the mine. In longwall mining, the roof supports are built into the machine, sitting between the top of the longwall miner and the roof of the room. As the machine progresses into the ore, the supports move with it, allowing the area behind it to collapse and fill in the excavated area.

The longwall method can recover up to 90 percent of the available ore. The room-and-pillar approach typically recovers about 50 percent.

When the ore deposit in relatively narrow, shorter cuts are made. This variation is called shortwall mining.

The old-school technique of blast mining, that uses explosives like TNT to break up ore, is still in use, but just barely – less than 5 percent of U.S. production.

Underground mining, then, is becoming increasingly efficient. It requires less human labor, which puts fewer miners in danger as they work deep beneath the surface. Still, underground mines are not the safest places to be.

We offer support in underground mines. Welcome your any consultation!

How to Install Concrete Fasteners
What is the Difference between Soil nailing and anchors?